Japanese games on Steam should not remove Japanese interfaces [Rant]

I scroll down the the "languages" section for that game, and what do I see? 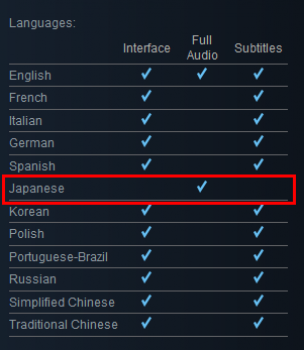 All languages except Japanese have their own interface (game text) and subtitles.

What the fuck? So BANDAI NAMCO doesn't want us Japs to play their game on PC?

This appears to be the case for many of their games:
Tales of Berseria
DRAGON BALL XENOVERSE 2
Sword Art Online: Hollow Realization Deluxe Edition
NARUTO SHIPPUDEN: Ultimate Ninja STORM 4

Why do they do this? It's total bullshit.

Note, not all Japanese-made games are edited like this. DARK SOULS III, a game co-published by BANDAI NAMCO, does not have Japanese removed.

While also having games that are western-only:
Resident Evil 6 / Biohazard 6
Devil May Cry 4

Fighting games such as the Guilty Gear series and THE KING OF FIGHTERS series are also not edited.
Posted by N04h at 2:53 PM