Do not buy the new Idolmaster Platinum Stars PS4 game

Idolmaster Platinum Stars came out yesterday on PS4. Above screenshots show some funny bugs in the game.

This is basically a "freemium" game, except you have to pay full price for it (about US$90).

If you look at the PS Store, this game has a whole army of launch day DLCs.

There is a purchasable item (P Drops) which increase the chances of obtaining rare costumes. This is similar to a "gatcha" in mobile games where you pay money to get random items.

There is a tutorial, and in it they actually talk about a DLC item, as if they're forcing you to buy it.

It's been about 24 hours now, and some reviews have started being posted on Amazon. It is rated an average of 3 out of 5 stars. Most people are complaining about the DLCs and the lack of content.

Charging full price for a game then being required to pay more for in app purchases is unacceptable.

So I randomly came across a Chinese website with free Japanese TV streams...

It has all the free-to-air channels based in Tokyo.
Posted by N04h at 6:09 PM No comments: Links to this post

How to sing Japanese karaoke at home

I've tested this on my own PS4 setup from New Zealand, and it's pretty good.

If you want to sing Japanese karaoke at home, and have a PS3 or PS4 console, you can install an app called Joysound.TV, a free download from the Japanese PS Store. You will need to create a Japanese PS Store account first.

Note the app is free to install but needs a subscription (1000 yen for 20 days) to use. You can buy PS Store credits online at places like Play Asia.

Your singing (if you enabled online mode) will be given a score and ranked against other people on the network. 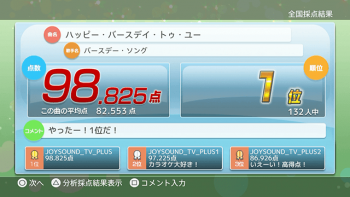 Your dad steals your girlfriend and impregnates her.

A story about a crossdressing male prostitute in the Edo period.

Some explanation on the words used:
E-Hentai Gallery
Direct Download
Posted by N04h at 10:43 AM No comments: Links to this post

A sickly childhood friend turns into a succubus.

We may also do volumes 1 and 2 if we can obtain the scans of them.

Guess it's better than Ingress. From Angry Fox Scans:  The day of the school festival has finally arrived, despite the festivities something seems to be bothering Kazuto and Karen. What sort of misfortune befell our hapless MC? Read it to find out!