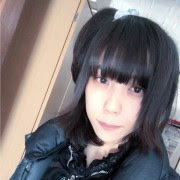 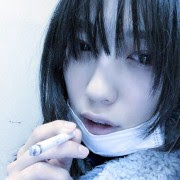 This is 20 year old "Fukase (ふかせ)" who calls herself a Neo-NEET (ネオニート: a NEET who has income without working). She calls herself that probably because her fans buys stuff her her and gives her money. She has an Amazon wishlist, and an online store.

She claims to be taking tranquilizers (those pills she keeps showing) and apparently is a college dropout. She refers to herself as "boku" (僕) which is normally only used by males. She often wears a mask because apparently has an inferiority complex about her chin.

Her Twitter is here. Her blog is here. She streams late at night on TwitCasting. A YouTube search comes up with a lot of her vids (here's her randomly singing at being weird at her coming-of-age ceremony and here's her being trolled by a caller and reduced to tears).
Posted by N04h at 5:47 PM