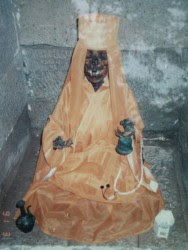 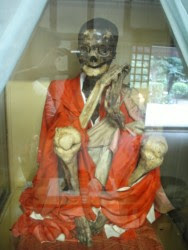 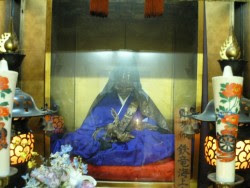 Sokushinbutsu (即身仏) are Buddhist monks who turned themselves into mummies by starving themselves and then being buried alive.

They would spend years alone in a mountain and severely restrict their diet (only eating seeds, plants etc) to reduce body mass. Normally, living like this in northern Japan you would not last a day. In truth, most monks died during this training period.

When the time came, they asked to be buried in side a box where he would recite sutras while ringing a bell. When the bell stopped the monk would be dead and time to be taken out of the ground.

Why monks did this is not well understood. Perhaps they believed that putting themselves though intense suffering would ease the suffering of others.